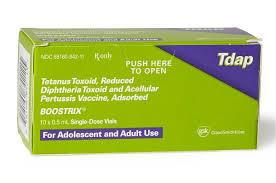 The Tdap vaccine, normally given to preteens, teens and adults, is different from the DTaP vaccine that we use in infancy and young childhood. It protects against the same diseases (tetanus, diphtheria and pertussis), but the relative amount of each component is different. We get asked about this a lot because it is given routinely to pregnant women during their third trimester and many times the rationale is not fully explained.

Some basics: The vaccine protects against tetanus, diphtheria and pertussis.

Tdap vaccine is normally given only once to most people. Preteens get it somewhere between 10 and 12 years old. After that most people continue to get a "Td" vaccine, also just called a tetanus shot, every 10 years. However, about 5 years ago, some obstetricians began giving Tdap vaccine to pregnant women. The rationale for this was that the pertussis antibodies would pass through the placenta to the fetus and the baby would be born with some immunity (called passive immunity) from the mother's vaccination. Normally a baby is not given their first pertussis vaccine until 2 months old, so immunizing mothers during pregnancy gives the baby some protection until then. This elegant strategy works very well, so now it is standard to immunize all pregnant women with Tdap with each pregnancy. For those who never received a Tdap, having a newborn is a great excuse to push grandparents, aunts, uncles and fathers to get the shot they should have anyway, as well as anyone else who will have frequent contact with the newborn. This would also apply to daycare workers, nannies, etc.

In the near future, we are likely to have an improved version of Tdap, and when we do it may replace Td for all adult doses. Stay tuned!!

Here's a story from NPR regarding Tdap vaccine during pregnancy.