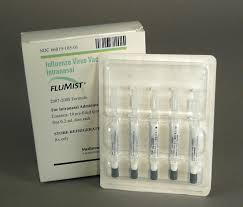 Influenza prevention is getting more complicated, sort of. Until 15 years ago, the only way to prevent influenza was to get a flu shot in the fall and hope it would protect you from getting the flu. The flu vaccine was grown in eggs and given annually. Since then the options have expanded to include egg-free formulations, high-dose versions for older individuals, and a needle-free nasal spray.

In 2003 FluMist was approved for use – a live attenuated influenza vaccine (LAIV) delivered as a spray into each nostril. Intranasal administration made a lot of sense – this is the way that influenza virus enters the body and if we could create a barrier to entry, it would theoretically work better than waiting for the virus to enter the body before starting to fight it. The big plus, of course, was that it was not a shot. This made it an immediate win with patients, especially kids. For docs, it was faster to administer and easier to use – no needles, blood, bandages or sharps boxes. Also, the back room management was easier, without need to draw fluid into a separate syringe.

However, although in some years the nasal spray vaccine worked well, there was a 2-year span when it seemed to work no better than a placebo. Although there are differences of opinion as to why, with no evidence of protection, in 2016 the CDC had to pull its recommendation for use of this vaccine. As a result, for the past 2 years, the only way to get vaccinated against influenza has been to get a shot.

For the influenza season starting in the fall (called the 2018-2019 flu season), FluMist is again on the list of possible vaccines for approval. It will need to be approved based on data collected over the past 2 years, and although it’s not a sure thing, the CDC would certainly love to have a faster, painless product back in the office, and so would many patients.

Some basics about the nasal spray flu vaccine: